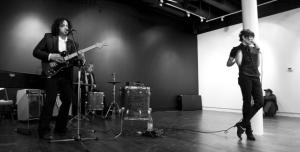 Our dear friend Marc Dantona and his super pretty band Pillars of Silence, including Roxy Brodeur and Meghan Edwards, take the stage tonight—Thursday, July 10th—at Cafe du Nord to celebrate the release of their ten-song debut album. Believe things should get going pretty early, around 8:30. We’ll be there right on time, do doubt cooling off after another one of these crazy scorcher days with whatever they keep behind the bar that goes with lemonade and lots and lots of ice. As our resident expression maven Tino would say, “Soooo ghooood.”