Coldest winter, summer in SF, just like they say Mark Twain said—though they also say Mark Twain didn’t say it. It was somebody else’s witticism, but nobody knows who. Reminds me of one of my favorite Chris Rock lines from the 1997 MTV VMAs, “The Spice Girls are kinda like heroin. Everybody’s doing it, but NOBODY wants to admit it.” Totally. 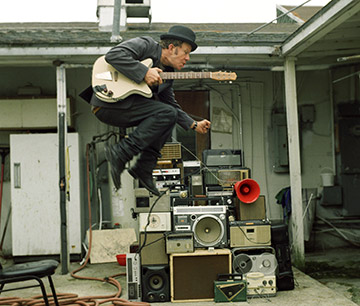 On the bright side, our main man Tombo Waits has given NPR the go-ahead to share an entire recording of his July 5th show at Atlanta’s゠Fox Theater. Fully two and a half hours of oldies but goodies, along with some fresh from the studio delights, so that now you can really be there at the show, not only in spirit, but in ear as well. Not as good as we’ll have it in Dublin, but it’ll do for now.

My one complaint is that I keep reading, reading about how young master Casey Waits has been accompanying his old man on drums and percussion: “They play with racecar precision and they are all true conjurers,” Waits says of his backing musicians, therefore including Casey. “They are all multi-instrumentalists and they polka like real men.” Real men, you say. Real men. Well how come I can’t find any pictures of this Casey Waits real polka man anywhere on the Web? Lifetime supply of stripey shirts to the kind soul out there who gets me that pickie….

The post The Full Tom appeared first on Gravel & Gold.