This Wednesday, we honor the majesty of the self-proclaimed Emperor Norton I, “Emperor of these United States,” “Protector of Mexico,” patron saint of Discordianism and overall celebrated citizen of San Francisco. 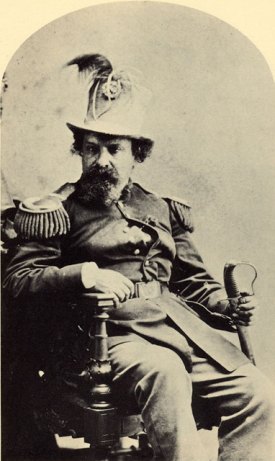 Born Joshua Abraham Norton around 1819, His Highness spent most of his early life in South Africa before emigrating to San Francisco in 1849. Upon arriving at our foggy shores with a hefty inheritance in his pocket, he promptly invested in real estate and established himself in the upper echelons of Gold Rush society.

But then, just when he thought plebeian glory was his, plebeian tragedy struck. In 1858, a bum investment in Peruvian rice cost him his fortune, forcing Josh to declare bankruptcy and to leave the city penniless.

Rather deterred, I would say, His Majesty returned to San Francisco the next year and declared his sovereignty by publishing a proclamation in the local papers:

At the peremptory request and desire of a large majority of the citizens of these United States, I, Joshua Norton, formerly of Algoa Bay, Cape of Good Hope, and now for the last 9 years and 10 months past of S. F., Cal., declare and proclaim myself Emperor of these U. S.; and in virtue of the authority thereby in me vested, do hereby order and direct the representatives of the different States of the Union to assemble in Musical Hall, of this city, on the 1st day of Feb. next, then and there to make such alterations in the existing laws of the Union as may ameliorate the evils under which the country is laboring, and thereby cause confidence to exist, both at home and abroad, in our stability and integrity.

His Grace later added “Protector of Mexico” to his official job description—a title he held throughout his unprecedented 21 year reign over America.

During this time on the throne, His Eminence issued many strongly-worded edicts aimed at reforming both his wayward bayside subjects as well as his national constituency. A visionary leader, unafraid of extracting harsh punishments in his effort to see his wishes through, Norton I brooked no disrespect when it came to the slangification of his adopted hometown:

Whoever after due and proper warning shall be heard to utter the abominable word “Frisco,” which had no linguistic or other warrant, shall be deemed guilty of a High Misdemeanor, and shall pay into the Imperial Treasury as penalty the sum of twenty-five dollars.

Presumably, he accepted payment in regular U.S. tender, which he must have then converted to his own currency, consisting of notes in a range of 50ア to $5 denominations. This Norton I currency was humbly accepted at tall the finest restaurants and most fashionable theater houses in town, despite having no federal backing whatsoever.

Not that money was of much use to Norton I, such was the love of his subjects for His Majesty. For example, when the golden epaulets, beaver hat and peacock feather that comprised his official regalia began to look shabby, the San Francisco Board of Supervisors took it upon themselves to offer up a suitably regal replacement uniform. In return, Emperor Norton I sent them a real sweet thank you note and issued a “patent nobility in perpetuity” for each supervisor.

These noble servants must have learned their lesson well, for it was not always the want of His Highness to deal so kindly with public officials—as was the proclaimed turn of events on October 12, 1859, when he formally dissolved the U.S. Congress, seeing as how

fraud and corruption prevent a fair and proper expression of the public voice; that open violation of the laws are constantly occurring, caused by mobs, parties, factions and undue influence of the political sects; that the citizen has not that protection of person and property which his is entitled.

Sound like perpetually familiar times? An inspiration, His Excellence went on to summon the army to depose the Congressional dissidents who boldly remained in office. And when they still didn’t get the message, he went ahead and abolished both the Democratic and Republican parties. No armchair politician-hater, he. 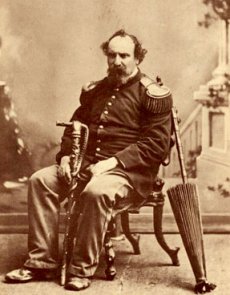 Given, Emperor Norton I may not have received the recognition he proclaimed and so obviously deserved nationwide, he was well-loved in our haven of do your own thing, king if you want to be, city by the bay. His edicts were regularly published in the local papers and restaurants prided themselves on their little “By Appointment to his Imperial Majesty, Emperor Norton I of the United States” brass plaques installed by their doors.

So it was totally standard when 30,000 people turned out to mourn the news of his death in 1880. He had died swiftly and forever at the intersection of California and Dupont Street, on his way to a lecture at the California Academy of Sciences. Mark Twain and Robert Louis Stevenson immortalized him. And in 2004, some folks even tried to name the Bay Bridge after him (they could not).

For our part, we Lady Shopkeepers of Gravel & Gold call upon the ghost of Emperor Norton I and invite him to come on by the shop sometime to pick up his free Profile of Awesome stripey shirt. We salute you, O king. May your invented name, and the boldness of your unwarranted proclamations, reign forever in our hearts.

The post All Hail Emperor Norton I appeared first on Gravel & Gold.