In this final lead up to Thanksgiving, I’ve been making an apple pie a day in an effort to perfect the craft. And while the pies have been delicious, they’re woefully far off from the perfection Leif routinely achieves with the same recipe. And, since I know practice and minuscule innovations make perfect in cases like these, I would like to extend Leif’s father-recipe to the lot of you in hopes that you might chime in with your findings about proper slice girth, proportion of flour to fat, and alternative filling ideas. Of course, your own entirely different recipes are welcome as well! All in the good name of a thunder-stealing Thanksgiving contribution. 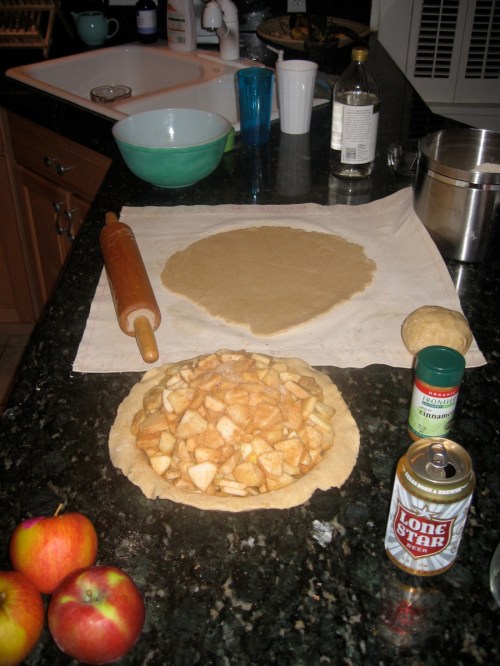 There are aspects to this recipe, if you know what I’m saying, so I’ll give it to you straight from the man himself. Take it away Leif:

Mix together flour and salt in a large bowl. I try to put as much
whole wheat flour in my crust as possible, but it depends on your
taste and the flour itself.* Slice the butter into 1 t pieces and cut
them into the flour with a pastry blender or two butter knives. You
want to make sure the fat smears into the flour without melting until
you have little crumbly bits the size of blueberries. Blend together
the wet ingredients in a smaller bowl, and then pour into a well in
the flour/butter mixture. Combine with a fork until everything’s
clumped up together. Divide into three equal volumes and roll out ;
each dough ball makes a single 9″ pie crust. Keep extras in the fridge
up to a few days.

* The crusts I made in SF this summer were all whole wheat pastry
flour, but when i got here i got some much grainier wheat flour, so
I’ve been cutting it half-and-half with white pastry flour.

Preheat oven to 425. Peel the apples, quarter them and remove the
seeds. For each quarter, slice the apple lengthwise at 1/4″ intervals,
and then cut the slices in half cross-ways.* Mix the dry ingredients
together in a bowl and then pour over your pile of apples, stirring
just enough to coat them. For the spices, basically you want just a
tad of nutmeg (maybe a couple taps on the side of the angled spice
jar) and enough cinnamon that you’re fairly uncomfortable with it.
Heap the mixture into a 9″ pie plate lined with a bottom crust (it
will probably make a small-ish mountain), add 3-5 t of butter on the
top of the mountain, and drape another pie crust over it all. Cut
cutesy things in the top, or use a pie bird from the world’s best
stuff store. Flute the crust edges between your thumb+index finger on
one hand and your pinky on the other. Bake at 425 for 30m, and then at
375 or so for another 20-30m, or until thick juice bubbles out from
the pie. You might need to cover the edges of the crust during backing
to prevent burning. Cool a bit before eating.

Also, Leif would like to add that he got the crust from the Raleigh News & Observer, and the apple filling is from his mom. Also, the carvings in the top crust are crucial. Now, let’s all get to baking!

The post Your Own Slice of Leif Pie appeared first on Gravel & Gold.