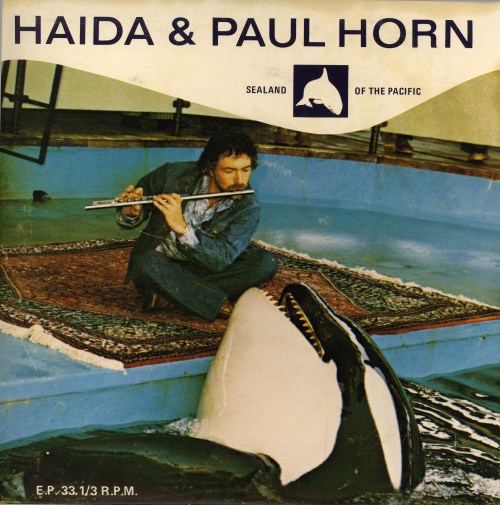 This E.P. lives on Lisa’s mantle. To confirm what your seeing, you can read the text from the backside:

Communication could be defined as “sharing a feeling”. A new and strange form of communication has taken place at Sealand of the Pacific in Victoria between whale and man. It grew out of an experiment and became a beautiful experience. The you of today would probably describe it as “a rap session”.

It all began in the fall of 1968 when a young male killer whale named Haida arrived at Sealand. He was named after the famous coastal Indians who were great warriors and worshipped the killer whale. Very little is known about these magnificent animals and in an attempt to increase man’s knowledge, Sealand’s research division began sound and communication experiments in 1972. It was during this time that jazz great Paul Horn was asked to participate by playing his flute for Haida. It became obvious that Paul and Haida tuned in, developing a close relationship and understanding. After hours, they communicated with each other in their own dimension, a unique duo of Haida’s vocal accompaniment and Paul’s flute. Haida loved Paul’s music and became his biggest fan. They make beautiful sounds together and this extended play record has been produced so you may share their experience.

YES! If only I could share with you what I’m hearing….well, to get a sense, you can take a listen to some of Paul’s other work. Seems Mr. Horn really knows how to pick ‘em when it comes to teaming up for a duet. Here’s another Horn on flute sesh to increase man’s knowledge, this time with some funky musical accompaniment from Lalo Schifrin and some groovy camerawork to match courtesy of the Vinyl Junkie.