This morning our whole household woke with the sunrise, made tea and an O-shaped breakfast pastry, poured mimosas, and were nervous together. 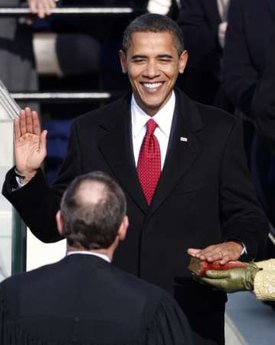 Only to share in the great success! Rick Warren was a joke—what was with his pronunciation of the girls’ names? Aretha wore a very good hat, though I wish I could have seen more of it and fewer stock panoramic shots of the Grand Canyon and the Picturesque Hard Scrabble Vermont Farm while she sang (Lisa’s filmmaker soul was a little bit crushed). His hand on the Bible upon which Lincoln pledged, Obama fumbled the oath, breaking the messianic spell, and was human again. The speech was good—more pragmatic than I was expecting. Some nice Dr. King nature/Bible images. But his Chicago acceptance speech was the one for the books. Everyone looked warm enough—and Sasha squirming about during the classical performance was the good and right thing for her to do. Malia was the consummate lady, looking just like her mama. And finally: Isabel Toledo and J Crew gloves. An excellent choice. 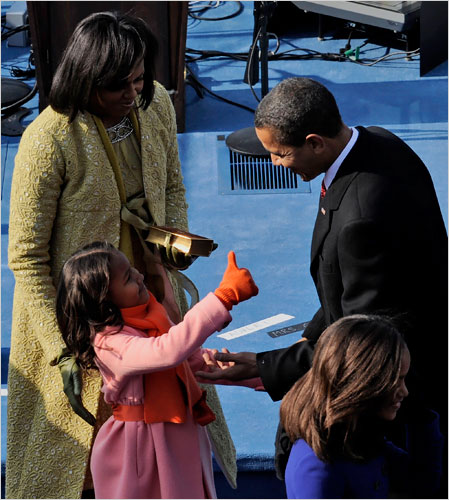 My favorite part was just the sound of Dr. Joseph E. Lowery’s voice, finally letting the whole event in, at the end. And his standard line from the civil rights chant, “Lord, in the memory of all the saints who from their labors rest, and in the joy of a new beginning, we ask you to help us work for that day when black will not be asked to get in back, when brown can stick around, when yellow will be mellow, when the red man can get ahead, man; and when white will embrace what is right. That all those who do justice and love mercy say Amen. Say Amen”