This perfect music was made by an Ethiopian nun by the name of Emahoy Tsegué-Maryam Guèbrou. She was born in 1923 to an aristocratic family of intellectuals and spent her childhood in foreign boarding schools and in exile in France, Italy, and ultimately Cairo, where she was finally able to receive musical instruction under Alexander Kontorowicz, a Polish violinist. She returned to Ethiopia in 1944 along with Kontorowicz, who was soon named Musical Director for Emperor Haile Sellassie. But despite her family and her teacher’s high standing, Guèbrou found conditions in Ethiopia disdainful toward lady-musicians. When the emperor declined her ambition to study music abroad, she was plunged into a depression so great that she came close to death, and was even delivered her last rites. She set herself to religious seclusion and secretly fled to the Guishen Maryam monastery, where she became a nun in the Ethiopian Orthodox Church. 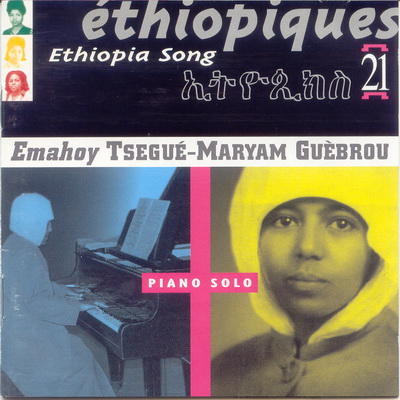 Decades later, she released a few records for a German label, donating all her profits to the poor. In 2006, she joined the incredible Ethiopiques family as Volume 21: Ethiopia Song. This is the music of her great, wistful sorrow. I love it. Big thanks to Meara for playing it with the window open the other day.