Quilts, of course, are composed of tiny parts that make a spectacular whole. And when you think about it, so are mathematical theorems. But it took Elaine Krajenke Ellison to figure out that tiny quilted parts could express rainbow-colored mathematical expressions while also being just plain awesome. Shown here are but a few of her Mathematical Quilts, and I’ve included her explanations beneath each one. 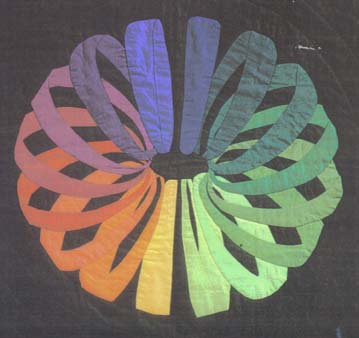 Clifford Torus – This work stems from work in the late 1800’s. The image of the torus results from projecting a sphere into the fourth dimension. Pioneering work on this topic was done by Thomas Banchoff at Brown University. His work, Beyond The Third Dimension was an inspiration to me, so I quilted his discovery! 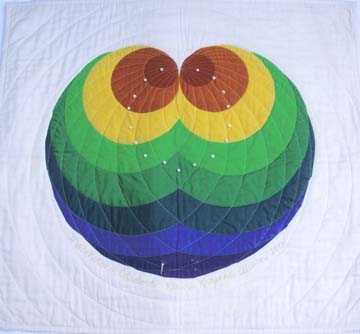 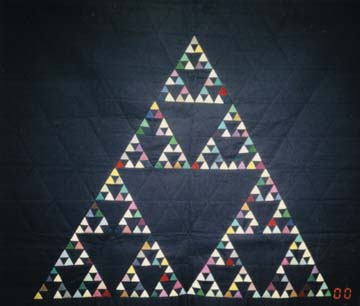 Sierpinkskis Triangle – Waclaw Sierpinski, 1882-1969, was a Polish mathematician that was very interested in patterns, including Pythagorean triples. This triangle, a fractal, was found on the floor of a church in Anagni, Italy. This oldest fractal dates to 1104. It is said that this fractal, named after Sierpinski, is the first fractal in the fractal alphabet. The quilt is owned by the London Science Museum. 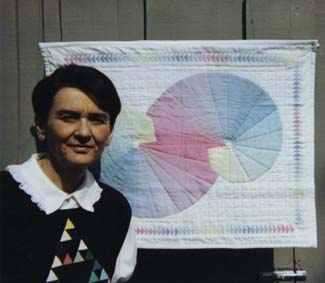 The Wheel of Theodorus* - Theodorus of Cyrene participated in the Cyrenaic school of moral philosophy. He tutored Plato and was a Pythagorean. His lifetime spans 465 to 398 B.C. During this time period the Greeks just started using written numerals. Further, the concept of the irrational number developed around this time. This quilt starts with an isosceles right triangle with sides 1, 1, and the square root of 2.

*Also note that the quilter/author appears to be wearing a sweatshirt quilted with her Sierpinkskis Triangle design.

The post Keeps You Warm, Keeps You Sharp appeared first on Gravel & Gold.